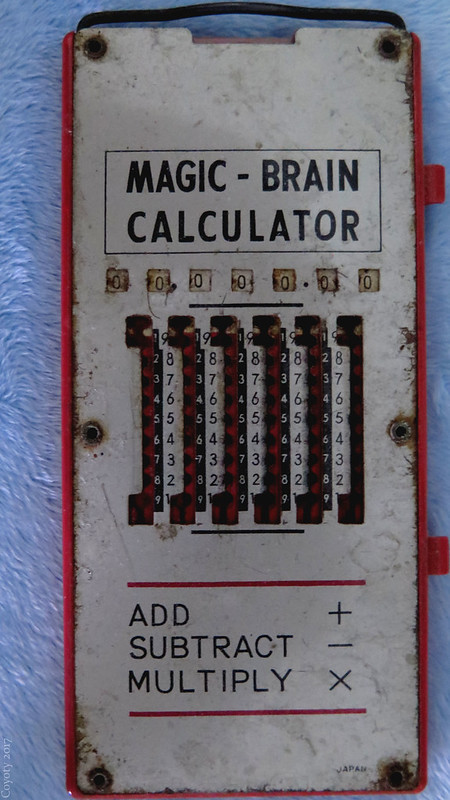 Magic-Brain Calculator, purchased from a TV Guide ad in the 1970s. All it does is add and subtract things, but it does it without electricity, mechanically. It came with a stylus, but you can use a pen or pencil tip to slide the geared tabulators. When done, you zero it by pulling the handle at the top.

“The Thacher calculating instrument was patented in 1881. It was cylindrical and could slide back and forth, giving it the power of several individual slide rules. It could do multiplication and division, and calculate interest, roots and powers of numbers to about five significant figures. It was also accurate to within about .01%, incredible accuracy for that time.

“This photo is free of all copyright restrictions and available for use and redistribution without permission. Credit to the U.S. Food and Drug Administration is appreciated but not required. For more privacy and use information visit: http://www.flickr.com/people/fdaphotos/ “ Part of a keychain flashlight.

The training engines are off people! There is now a real hoverboard that would get the Green Goblin giddy with maniacal delight and it’s called the Flyboard Air. Oh, and it can go up to 93 mph and fly 10,000 feet in the air. No, you did not read those numbers wrong. The Flyboard Air comes from the insanely inventive team at Zapata Racing, which is led by the—apparently—insanely brave Franky Zapata. If the Zapata company name doesn’t ring a bell, its original Flyboard probably will. The part-watercraft, part-aircraft (nicknamed “dolphin jetpack”) blew our collective minds when it appeared back in 2011 and showed riders springing out of the water and then flying and looping tens of meters into the air like marine mammals who forgot gravity is a thing. But this Flyboard Air. This legitimately takes hoverboards to a whole new level. Unlike the original Flyboard, the Flyboard Air doesn’t require a water source to propel itself, although it’s not 100% clear how it works, as no mechanical